We Got the Beat 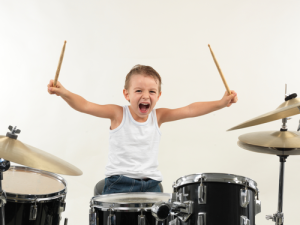 Around fifth grade, I was faced with a life-altering decision. To be or not to be in band. Ok, it wasn’t really a life-changing decision, but it was something that I was ill prepared for. Other than mandatory recorder practice in 4th grade I had zero experience with any other instrument. I loved to slam on the keys of my grandma’s piano, and play with the cool sound effects on my great grandma’s electric keyboard in Florida once a year, but other than that, I really had no clue what I was getting into.

The first instrument I tried out was the saxophone. That dream was short lived when I looked at myself in the mirror holding the oblong object and said in a loud, Will Smith voice, “Aww, hey-all no.” For some reason, I thought I looked weird holding it (as if any person looks normal holding any instrument … trombone anyone?).

So I was back to square one. Mr. Willaby, the principal at Valley Lutheran at the time, had a trumpet he wasn’t using and said he would loan it to me if I was interested. I didn’t know much about “trumpeting” but I saw that there were only three buttons. That was good. Simple. I was on board.

It took a while for me to become a decent trumpet player, but by eighth grade, I was first chair and well on my way to joining band in high school and so on. Except, well … after eighth grade, I never played the trumpet again. The jerry-rigged—and I do mean that seriously, mine was like three different colors from a hodgepodge of parts—instrument sat in its case, never to played again. I actually have no clue what happened to the darn thing. To the disappointment of my grandparents and parents, I’m sure, I didn’t join band in high school. I had become completely disinterested with “trumpeting”, something that, like I said, I was quite good at, and had taken years to get good at.

Side note, I forgot to mention I also did choir in middle school too. It took me until page three of this essay to remember (for real) so you can tell how much my heart was in that. I bet there’s a lot of us that did these kinds of extracurricular things back in the day that in no way have any bearing on our lives now, other than we all own that one box of awards and memorabilia conveniently placed in the back of our cluttered attic.

So what happened? It’s a pretty simple answer, really. I played the wrong instrument.

For as long as I can remember I’ve been a tapper. I’m sure many of you do this when you drive—you tap your hands on the steering wheel while the radio’s playing. But I took my finger tapping beyond the constraints of the car. It followed me into the classroom at my desk. Pencils became instruments for epic drum solos. I used to have this tin Red Wings waste basket in my bedroom, and I turned that freaking thing upside down and slammed on it with reckless abandon. I was given real drumsticks from my parents and I shredded that metal until it was a dangerous surface of jagged edges and spikes. I broke packs of pens when I tapped them on our downstairs computer desk. Ink went everywhere a few times. So much stuff got ruined (sorry mom) but I just… couldn’t… stop!

I was a pretty sucky drummer, but the beat was in my blood. I thought drummers were the coolest people in the bands. You know, the people they have out of focus and wayyyyyy off in the distance on the cd sleeves—yah, I thought those people were legit. I aspired to be like them. But I never did a thing about it.

I played the trumpet when I wanted to tap! tap! tap!tap!tap! It wasn’t until junior year of college when a little game called Rock Band and an entire month of legitimately doing nothing and staying on campus for free (see: How to Cheat Your College Into Giving You Free Rent) where I finally learned how to play the drums. Yes, I learned how to play from a video game. I played the game so much I broke the foot pedal within two weeks and replaced it with a wooden one from eBay. I tried my skills on a real set in our college band room, which was conveniently always unlocked. Took a few times, but I eventually could carry a beat. Later, when I graduated and lived in a house in Mequon WI, I borrowed a junky set from my church in Saginaw and set it up in our basement, and I slammed the piss out of that thing. At least two cymbals broke. The snare was set up on a wastebasket. The thing looked worse than trash, but that was part of its allure. And I even sold the thing on Craigslist later.

There are some people who, late in life, discover a new career path or interest that seems contradictory to the path they’ve been trekking down. People look at them and say, “Why would they do that when they’ve always done this?” What they don’t realize is that is what you’ve always wanted to do instead of this. Maybe you’ve been ignoring it. Maybe you’re doing something in its place because it’s more logical, more feasible to do than what you really want. Maybe you actually are doing it, but you’re met with obstacles and people who push you to do something else.

I started trumpet in fifth grade, but I had already been tapping years before that. I guess I just never saw it as a legitimate thing to pursue. Sure, I obsessed over it, dreamed of being in a band someday—and still do—but I never put A and B together to make C.

So I ask you, fellow reader, what have you had the beat to your whole life? I truly think that the things we want to do most in life have been ingrained in us since the beginning. Sure, some things come out of nowhere and attract our interest, but most of what we love and want to do is because years ago, we got the beat. And then that beat became more. And then… well, there never was an and then because the dream died. You did something else.

You never thought that the beat was a legitimate and realistic outlet to pursue.

I don’t want this essay to fill you with regret. That’s not its intention. I simply want you to reflect on your life and find the thing you’ve got the beat to the most and see if it’s actually the thing you’re doing the most.

I didn’t start writing until I was 25, but that’s not entirely true. In third grade, I loved writing stories. I can trace my sarcastic and blunt style back that far. But I never did anything about it until now. I’m sure people raise an eyebrow when they ask me what my number one career choice is and I tell them, Full-time Author. And they have that right because, until lately, I never did much about it. But it has always been ingrained in me.

How are people supposed to know what you love if you only do it behind closed doors? And if you don’t show any passion for it.

What’s stopping you from pursuing the thing you want to do, is it an image thing? I thought I looked mighty fine playing the trumpet, but I would have rather been hidden in the back, slamming on that snare.

Is it a money thing? I bet it’s nice to rake in $60,000+ at your nine to five but would you rather be volunteering at your church or at the animal shelter? What about that painting you’ve had an idea for since 9th grade art. When are you going to start that? Clock’s ticking … Tick. Tick. Tick.

I’m never going to be a professional drummer and I’m ok with that. What I’m not ok with is having this thing that I like to do stay imaginary instead of real.

This Wednesday, my friend Josh, who is a worship leader here in Grand Rapids at his church, is letting me come by to jam a bit before the Lenten service. I haven’t touched a set since 2010. I will probably be awful. But you can’t make the Varsity squad on your first try. Not unless you’re a freak of nature like Lebron James. I have no clue how long it will take for any of my writings to see the light of day, but I ain’t gonna stop. If I did, it would be suicide (painful).

So ask yourself, do you have the beat? If you do, then why aren’t you playing it every day?