“And who knows, maybe people like me will begin to believe there was a reason for all this. Maybe, it was so we could become stronger. Ripe with age. Maybe we’re exactly where we need to be to go to the next step, forward and on.” 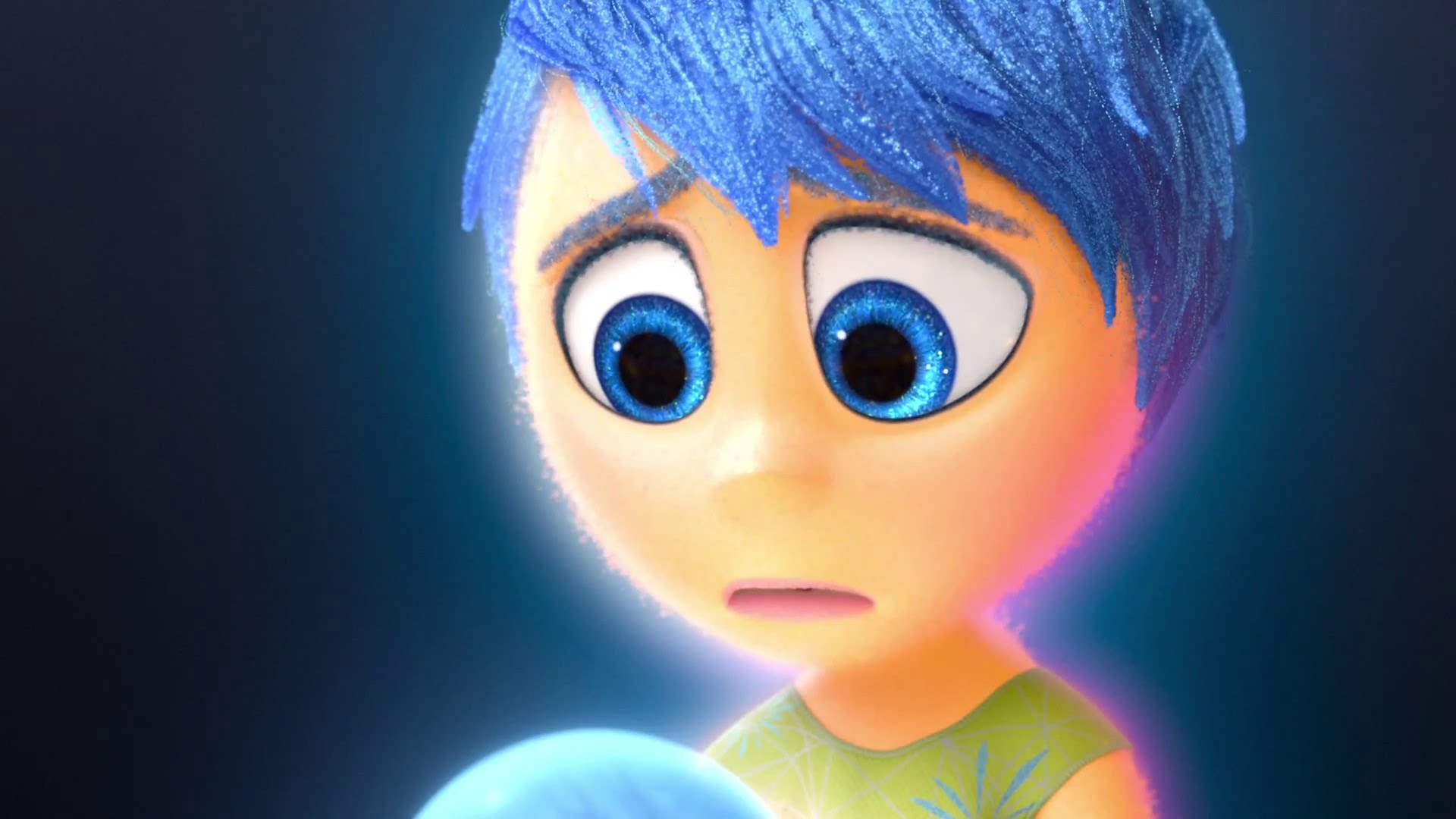 Inside Out takes place in the mind of Riley, a rambunctious, hockey playing 11-year-old. Five emotions control her everyday life: Fear, Disgust, Anger, Sadness, and Joy. Joy has been on cruise control most of Riley’s life, and she’s the one who obviously brings the best out of Riley. But when a sudden move from Minnesota to San Francisco throws Riley’s emotions in a tizzy, and Joy loses her swagger, it seems like Riley could be headed towards a dark and permanent emotional state.

That’s basically a by-the-numbers summary of the beginning of Inside Out: no real spoilers, nothing that isn’t in the trailer. For this movie Disney finally has a family with TWO PARENTS! Typically, if a Disney character’s parent doesn’t directly die in their films, the main character either has a mom or a dad but never both! Mufasa—dead! Nemo’s mom—dead! Ariel’s mom—??? The parent deaths in Frozen are done in a wide-shot, throwaway scene! WHAT? Sensing a pattern? Disney goes for the gut punch with heavy sadness. It doesn’t get worse than losing parents.

Not to a child.

Which is why the dilemma in Inside Out is so refreshing. Riley has both her parents. They seem to be doing fine. It’s this sudden move—her awful new apartment, her new school, the awful looking broccoli pizza—that sends her into a spiral. This is the moment for this Disney film. And here’s the thing, it’s just as big of a deal as someone’s parents dying.

In our society, we are constantly living in the wake of other people’s lives. We need to know everything, share everything, live everything the way others live. However, most parents don’t teach their children to compare their happiness with others (it actually may be one of the first things we learn).

“Son, don’t compare yourself to Johnny.”

We’ve all had this debate before with our parents. We wonder why so-and-so is happy and gets all the good stuff and why we can’t have that. And our parents know that this is wrong. They know we shouldn’t compare ourselves to others. They really do a good job of telling us this, don’t you think? At least my parents did!

Now parents, please don’t take this as a knock, but when it comes to sadness you do the EXACT OPPOSITE!

When it comes to sadness all we DO is compare. We say, “Your thing is no big deal compared to this. I mean, you don’t have cancer, you aren’t dying, you CAN’T BE SAD!”

And suddenly, it all goes caput. Because if I’m sad and I can’t be sad because someone else is sadder than me, then am I really sad or am I supposed to be happy? I feel sad…

Riley’s parents are healthy. She’s healthy too. But the move to San Francisco is the WORST she has ever felt. And it is a big deal. Maybe not to you, or me, but to Riley it is the Biggest of all the Deals. And she deserves to feel that. She doesn’t need to be told to be happy when she is sad, and she doesn’t need to disguise her true feelings, because when we do that we are living out someone else’s perception of how we should live. We’re not living for us. We’re living a LIE. People see sadness as a weakness because, “It can always be worse.” Really?

So let’s travel to Serious Town for a moment. I went through a pretty rough break-up a year and a half ago. Don’t worry, I’m good now, and like…it doesn’t even feel like the same life, you know? I barely remember anything. Anyway, at the time it knocked my socks off. Like, was-gonna-propose-in-two-weeks-and-shopping-for-rings off. Get me? So I was kind of a mess, and at the same time it was a crappy winter and my friends Dave and Nicole had just moved out of the house I was renting and I was all by myself and I had to still work with this person 10 hours a day, so yeah, hell on earth. I actually told her that at work at the time. “Working with you now is hell on earth.” It was my first break-up so I didn’t know how to get through those things. It was easily the worst I had ever felt in my entire life. But if I would have sat there and compared myself to other people, I would have seemed like a wimp.

I mean, “Break-ups happen, right? GET OVER IT DUDE!”

But not for me. It had never happened for me. And like those moments when Riley’s life spirals out of control because of the move, one could think moving is a pretty weak thing to set someone off. Lots of people move. Suck it up, right? But Riley had NEVER moved. I had NEVER had a break-up.

We weren’t lots of people. We were us.

That’s when you realize what you have to do. You have to FEEL IT. You have to tread through the muck and the mire for a bit because if you don’t then when will you let it come out? When will you feel it? Everyone is going to tell you it’s ok or that you should smile or that you maybe just need a day to do something fun. Sadness gets pushed aside. And Inside Out does a great job of showing the danger with this. Joy actually is the VILLAIN of the movie (sort of a spoiler, sorry). Pretty crazy, huh? She’s the helicopter parent who always must have her child propped up smiling, even if they are sad within. She thinks it’s wrong for Riley to feel sad even when it’s HOW SHE NEEDS TO FEEL.

So what did I end up doing after the break-up? I went through counseling for a year. Whoa, seems extreme right? But the thing I faced was A) let this thing pass by and try to be happy or B) be sad, FEEL IT, and have someone who doesn’t know me help me get through it.

Do we believe that it’s just as ok to cry as it is to cheer? Does every situation require happiness? You’re not doing cartwheels and high-fives down the aisle at your best friend’s funeral I hope (unless they were an Olympic gymnast, that would seem applicable).

Where would Joy be without Sadness? Just think about it. Do we cry after every single person on the planet dies? NO! That would be insane, like the biggest tidal wave of tears known to man. We cry because we knew them—we knew the joy they bestowed on our lives. We’re SAD because we’re actually HAPPY. We were the lucky ones who got to hang out with them. It’s through sadness when we really learn the power of joy. The two are necessary. Like earth and water.

Sure, there are some kids who milk it. They cry to get attention and fake it to earn some sort of reward. I’m not talking about that here. I’m talking about the child who, for the first time in THEIR life, is faced with a new problem that—if not felt properly—can emotionally damage them. That’s what’s at stake for Riley: permanent emotional damage, all because she moved and it sucks and she just needs to FEEL that rather than brush it under a rug.

I could have gone through the motions after my break-up. Just put on a smile and pushed through it while never actually experiencing it, letting the pain linger inside for another day. Instead, I acknowledged the truth: this hurts really bad, I need to feel this hurt but I don’t need to feel it alone.

That’s what’s really cool about Riley. She has her parents. They can help her through it. Because if there’s one thing Inside Out reminds us it’s that when we experience sadness, we need not do it alone.

If you’re happy…ok. If you’re sad…that’s ok too.

Ok… (Sorry, went all Fault In Our Stars there)